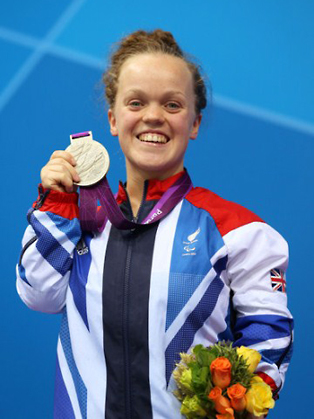 We chose Ellie Simmonds because she never never gave up on her dream.

Eleanor May Simmonds, OBE (born 11 November 1994) is a British Paralympian swimmer competing in S6 events. She came to national attention when she competed in the 2008 Summer Paralympics in Beijing, winning two gold medals for Great Britain, despite being the youngest member of the team, at the age of 13. In 2012, she was again selected for the Great Britain squad, this time swimming at a home games in London. She won another two golds in London, including setting a World Record in the 400m freestyle, and a further gold medal at the Rio Paralympics in 2016, this time setting a world record for the 200m medley.
Credits to Stephenson Studio School