She broke down barriers for future women writers. 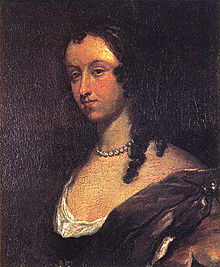 Aphra was the first English women to earn a living as a professional writer. She broke down barriers for future women writers. She also wrote the first anti-slavery book.

Aphra Behn (1640-1689) was the first Englishwoman to earn a living as a writer, a role not thought proper for women. She was treated as a celebrity but criticised for writing too. Separated from her husband, she was ‘forced to write for bread and not ashamed to owne it.’ Aphra Behn wrote 18 plays, 6 novels and 2 collections of poetry. Nell Gwyn played female lead in Aphra Behn's play ‘The Rover’ (1677). Aphra spent time in the West Indies and worked on what she saw into ‘Oroonoko’ (1688) - a novel about an enslaved African prince and the first English book to express sympathy for slaves. Aphra Behn broke cultural barriers and was a role model for later women authors. In 1929, the author Virginia Woolf said: "All women together ought to let flowers fall upon the tomb of Aphra Behn … for it was she who earned them the right to speak their minds."
Credits to Charnwood Creatives