Montessori broke gender barriers and expectations when she enrolled in classes at an all-boys technical school, with hopes of becoming an engineer. 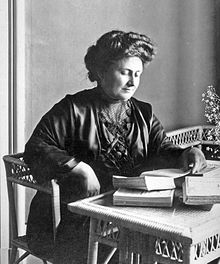 Maria Tecla Artemisia Montessori (August 31, 1870 – May 6, 1952) was an Italian physician and educator best known for the philosophy of education that bears her name, and her writing on scientific pedagogy. At an early age, Montessori broke gender barriers and expectations when she enrolled in classes at an all-boys technical school, with hopes of becoming an engineer. Her educational method is in use today in many public and private schools throughout the world. Based on her observations, Montessori implemented a number of practices that became hallmarks of her educational philosophy and method. She replaced the heavy furniture with child-sized tables and chairs light enough for the children to move, and placed child-sized materials on low, accessible shelves. She expanded the range of practical activities and included large open air sections in the classroom encouraging children to come and go as they please in the room's different areas. In her book she outlines a typical winter's day of lessons, starting at 09:00 AM and finishing at 04:00 PM including; Greeting, Personal Cleanliness, Exercises of practical life, Going over the room to see that everything is dusted and in order, Language, Conversation, Religious exercises, Intellectual exercises, Sense exercises, Simple gymnastics, Movements, Free games, Directed games, open air, Manual work, Clay modelling, design, Collective gymnastics, Songs, Visiting, and caring for, the plants and animals. She felt by working independently children could reach new levels of autonomy and become self-motivated to reach new levels of understanding. Montessori also came to believe that acknowledging all children as individuals and treating them as such would yield better learning and fulfilled potential in each particular child. She continued to adapt, altering or removing exercises which were chosen less frequently by the children. Also based on her observations, Montessori experimented with allowing children free choice of the materials, uninterrupted work, and freedom of movement and activity within the limits set by the environment. She began to see independence as the aim of education, and the role of the teacher as an observer and director of children's innate psychological development.
Credits to Montessori